About Some Of Our Cats

An introduction to just some of our cats that we have shared our home with over the years...

These kittens were (sadly) put out for adoption. 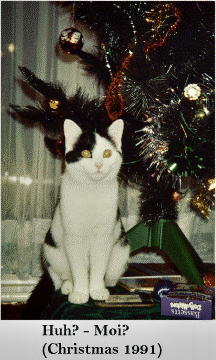 The occasion of our unplanned meeting with Sukie was a visit to Birmingham and a family re-union in early October, 1991. No sooner had we arrived at my Mother's house than this little black and white creature emerged and wanted our attention - particularly our son's who was aged 6 at the time.

Of course, he (Adam) loved her and milk was put outside for her, as you do for all kittens. Adam persisted in wanting to know why we couldn't take this kitten back with us (to London) and my Mother explained that some nearby neighbours actually "owned" her. But it also transpired that they were not treating this kitten very well - and it was being left out at night. Winter was approaching. So, to Adam's delight, we decided to kit-nap her!

I have to explain that I had been used to having pets. As a child myself, I had a variety of different animals at different times - cats, dogs, birds, tortoise, tropical fish - even chickens. And we currently had two quiet-mannered cats at home that we'd acquired 4 or 5 years earlier. Sukie (as we named her) proved to be - as they say - "something else". Even on the way home, we had put her in the back seat with Adam, leaving her free to roam as we were without basket, and when (on the motorway) I quickly turned round to check that all was right on the backseat then Sukie - having spotted that my attention was towards her - promptly jumped on the back of my driving seat and wanted to participate in steering the car! That was a momentary panic!

Our home in Norbury, South London, bordered onto a common, so our pets had free access to plenty of grassland and bushes. Sukie thrived in it. But it was not too long after that we found (as we had suspected) that she had not been neutered, as two of the biggest likely-cats arrived in the back garden, seated next to one another in expectation of an evening's pleasure. One of them chased into our house and upstairs to find her. It was a battle to remove him!

The feller we ejected turned out to be the local bruiser who visited everyone's home to be fed. The neighbourhood knew him as "Bonzo". After we had corrected Sukie's sexual status, he came to our house and my wife went to feed him. However, he was not sure about us, and went to flee. Out came Sukie, and presumably "said" something by telepathy, for he stopped dead in his tracks, turned around, and from that day was fed by us as a passing visitor until the day he died, 3 or 4 years later. He and Sukie then embarked on a fascinating friendship - they were often seen "walking out" together, she this waif-like lady and he a bruiser! The Lady and The Tramp! He was certainly her best buddy and always favoured him to Tom, our resident male. However (I think it was after Bonzo died), Sukie came a bit closer to Tom, and they sometimes slept together on the settee.

In fact, with regard to Tom, it was Sukie that on one occasion alerted us to the fact that Tom was hurt. She came in and out of the house meeowing in an alarmed way, and when we looked outside, sure enough Tom was nursing a hurt paw. We, of course, then applied the necesary first aid for him.

Backtracking a little to the Christmas of 1991 (just 2 months since Sukie became a member of the family), up went the trimmings as usual. But, of course, Sukie thought it was great fun to pull down the tree and all its trimmings. Not just once, of course!

The local common being full of small wild-life, it was Sukie's paradise. She (our other two rarely bothered) thought it was wonderful to bring home her latest catch, and on one occasion dropped a bewildered vole into my wife's lap! We thought, "Ah, she's giving them to us live - we will let them go." She did not like that one bit! So the next time she caught a mouse or vole, she happily sat on our widown-sill (outside) and ate the poor creature in front of our eyes! Never again did she bring home live catch!

Sukie's determination for attention only increased as time went on. It was impossible for us to pay a visit to a neighbour without she following us outside and demanding to know where we were going! Or so it seemed, so much fuss she made! We could be in the neighbour's house and she would literally cry outside to remind us she was waiting! On coming out, it seemed that she was entitled to complain most bitterly that we had taken our attention off her! But she was always "lovely with it". Her manner was captivating in a manner I had never known before from a pet.

So when it came for me to post some letters at the postbox just 100 yards down the road, she again wanted to know what I was doing and where I was going. "Right", I said, "come with me then!". She did just that! Down the road we went, she often diverting down entrances to see what was going on but always catching up with me as I strode on. After posting the letters, I diverted to complete a walk around a block of houses, and she duly followed. On arriving back home she meeowed to tell everyone what we had done together! This was not the only "walk" we went on - the last was just 2 or 3 months before she departed from us, years later.

In 1998, Sukie was 7 and we moved house to North London, with our other cats. Our two original cats had had to be put down because of disease, but we had two new cats in addition to Sukie. This proved not to be a good move for Sukie in particular. We no longer had the common for her to explore, although our new back garden was longer with plenty of adjacent gardens. But it was not the same for her, and she possibly missed Tom who had been her most recent claim as a "buddy". She seemed to become morose and began to stay upstairs and sleep in our bedroom, just coming down to eat and go out as little as possible.

But it was in 1999/2000 that we had (what might be called) several disasters including the death of two important members of my family and I became out of work (apart from other issues). I found myself with too much time on my hands and wondering how I was going to solve those various issues. Sukie was, sorry to say, left to her own devices to a large extent.

I was by myself sitting watching TV one day in 2000, when an astonishing thing happened. Sukie suddenly ran into the sitting room from her reverie upstairs. What is more she had on her back what I would say was "vibhuti" - a sacred ash used in particular by a guru whom my wife and I followed. Suddenly her personality became much more like her old self, and she spent so much time with me, as though providing comfort in the face of all the difficulties we had. The transformation was astonishing.

During the course of 2000 and 2001, I found some contract work, and in October, 2001 I went to Sunderland on a contract that was to last nearly a year. I spent my time up there during the week and came home at week-ends, although later on I was able to do a lot of my (computer-based) work from home. But, again, that triggered another development in the bond that had evolved between me and Sukie. When I arrived back on Friday evenings and relaxed in my chair, she would jump onto me and (something she had never done before) slowly sink herself into me so that her head rested on my shoulder! This was as though to say, "I thought you wouldn't come back!".

Since then, we continued to have fun, and often had meeow-English conversations! She might (for example) come in from outside and I would ask where she had been, to which she would always reply, and the "conversation" would just continue and continue! She developed the habit of sleeping in our bedroom at night, and when it came to morning she would lie on one of our pillows and fix her gaze on the face of one of us (and perhaps paw the mouth) till the chosen person had no choice but to wake up and feed her (and the other cats)! But we noted that the black portion of her coat was beginning to turn brown - a sign of age. She was approaching 14, but we thought how well she seemed, despite the loss of both incisors. I talked about how she might last into her 20s. She'd even managed to make friends with another local bruiser!

We entered 2005, and her eating habits began to change. She not only started to eat excessively (without putting on weight, she remained waif-like all her life) but also started demanding tit-bits from our own plates. She started developing a liking for all kinds of food - including curry! It was amusing, but we gradually thought something was wrong, and on 11th November took her to the vet, who confirmed on superficial examination, that he suspected a tumour in her tummy. On the 14th November he operated and found a large tumour and a secondary tumour. And her spleen and liver were also affected. After obtaining permission from me, he removed the growths, and she came out of the operation apparently successfully at first, but died within two hours. I had noted a couple of days earlier that she seemed to have become bonier of late, and even seemed to be having a little breathing trouble. Her strength was not up to the rigours of such an operation. But such was her spirit, I had taken her to the vets and rather assumed that I would see her at the end of the day, as usual.

The singular truth, I then found out, was that I had formed an attachment to this cat in a way I had never done with any other pet before. Previously, the passing of any pet had always been a sad occasion, but with Sukie it was as though a close personal friend had passed on.

Sukie was THE cat of all our cats that gained the attention of family and friends. Even when young nieces and nephews came to visit, whilst the other cats would scarper, Sukie was always available to be friendly, and would not mind (too much!) any prodding and probing from the youngsters! Friendliness and Gentleness (I do not recall her ever scratching anyone) were her main positive traits - but she certainly could sulk! On the night before her op., she was stopped from going out - vet's instructions - so she got in such a mood that she placed herself in an inaccessible place so that no-one could reach her or coax her out! The morning after, it was as though nothing had been wrong, and she gave her usual warm greeting. Her last warm greeting as it turned out - much to our chagrin, and loss.